Pacific Front, Missing, and After Death 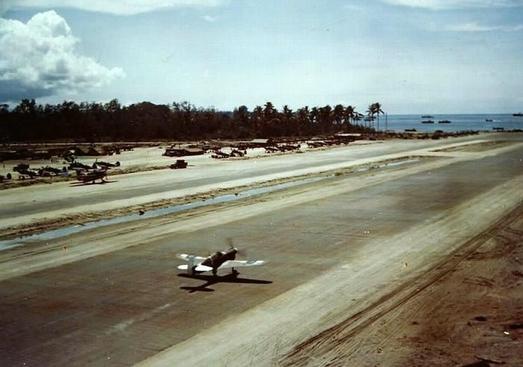 Torokina Airfield, the airfield at which Captain Blount was stationed for the duration of his service; on the island of Bougainville.
Three weeks after Blount's temporary leave to Hattiesburg, he was reassigned to VMF-321. VMF-321 arrived in San Diego on September 29, 1943 and soon was out to sea. Their first area of deployment was American Samoa, where they arrived on October 6, and where VMF-321 would stay until November 15,  training their pilots to fly F4U Corsairs at night. On  November 15, VMF-321 began its move from Samoa  to a small island called Efate in the Vanuatu  archipelago, still over 1000 miles southwest of the Solomons. While the members of the Marine unit  had moved, they had not brought any planes with  them to Efate, so they were stuck for a short time,  unable to  train. During this time (Nov 20-25), the  officers played the enlisted men in a five game  series of softball. The enlisted men won 3-2 (Capt  Blount was an officer). While at Efate, Blount was not completely inactive. On December 13, 1943, he and six other VMF-321 pilots ferried F4Us to Guadalcanal from Efate. December 24, all of the pilots of VMF-321 were flown from Efate to Vella Lavella in the Solomon Islands. The following day, Christmas, the pilots were oriented to air operations in the area. They were also treated to a full course turkey dinner, which one marine described as a relief, featuring real butter.

VMF-321 would spend much of its time stationed in the Solomons on the small island of Vella Lavella, nearby the larger Bougainville, but Blount would not be with them. Rather, Captain Blount, as well as many of his fellow pilots from VMF-321 would be temporarily attached to another aerial attack squadron, VMF-212. The tour of these temporarily attached pilots was to be from December 24, 1943 to January 28, 1944. Since early December, VMF-212 had been stationed at Torokina airfield on Bougainville island, and had been performing fighter raids on the Japanese stronghold of Rabaul on the north side of New Britain. 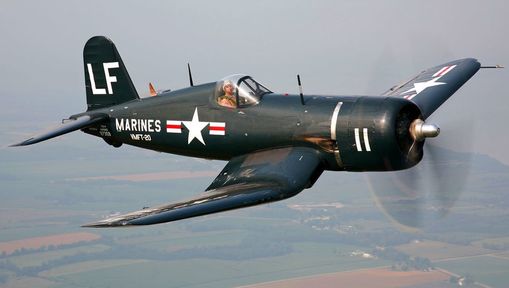 A Chance Vought F4U Corsair; the type of fighter plane flown by Captain Blount.
Captain Blount is known to have flown two combat missions before he disappeared. Given that his unit was in a combat           zone for less than two weeks before Captain Blount went missing, and that his unit's war diary for December 1943 and January 1944 can be accessed, it   seems unlikely he was involved in any other missions   besides the two described below.
On December 30, 1943, Captain Blount, along with 48   other American fighters, provided escort for two squadrons of B-24s on their way to bombard the Japanese at Rabaul. Eight pilots from VMF-321 were assigned to this mission, but only four of the pilots, Blount included, were able to rendezvous with the bombers and complete the mission. One of the 321 pilots had engine trouble and could not take off, and the other three were turned back by bad weather. Captain Blount completed this mission with no reported injuries or damage to his aircraft.

On January 2, 1944, Captain Blount participated in a fighter sweep on Rabaul. At 11:45am, the American pilots had arrived over their target, Simpson Harbor, but they did not own the skies with impunity. Thirty to forty enemy fighters (called "Zekes" by one marine of VMF-321) intercepted the marine pilots. Captain Blount was last seen around 11:50am by his wingman, Lieutenant R.L. Hames. He was in pursuit of an enemy Zero, and his plane appeared to be "under control".
​ 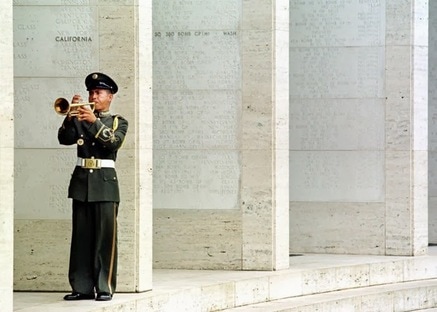 A soldier, honoring the fallen at the Tablets of the Missing, Manila.
After January 2, 1944, Captain Blount was never seen again. Blount's aunt and uncle received word that he had gone missing January 24, 1944. On January 15, 1946, Blount was declared dead, the likely cause of death a plane crash, and his remains were later declared non-recoverable on November 15, 1949. Captain Blount was memorialized at the Tablets of the Missing in the Fort McKinley Cemetery in Manila, Philippines as a result of his MIA status and area of deployment.